Posted by: Felipe 8 years, 11 months ago

In a young, dynamic field like Machine Learning, several companies have realized that proposing research challenges are an excellent way to motivate research groups worldwide to take interest in a problem they want to see solved. This phenomena is behind the success of initiatives like Kaggle, but it also has an analog in the field of bioinformatics: the DREAM Challenges.

During spring and summer 2013, three simultaneous bioinformatic challenges took place, proposed by the DREAM consortium. One of them, the DREAM 8 Toxicogenetics Challenge, caught the attention of two partner labs of MLPM: Karsten Borgwardt’s group at the Max Planck Institute Tübingen, Germany, and Jean-Philippe Vert’s group at MinesParis Tech located in Paris, France.

In the bioinformatics challenge, the problem was to build a Machine Learning model which is able to make predictions about the toxicity of different chemical compounds for distinct cell lines by using genomics data (SNPs and RNAseq) to characterize the variability across cell lines, and a set of chemical descriptors obtained with chemoinformatics packaged to characterize the variability across chemical compounds. In simpler terms, participants are challenged to come up with the best way to model how differences in the genome of different cells affect the response of cells to exposition of distinct chemicals. 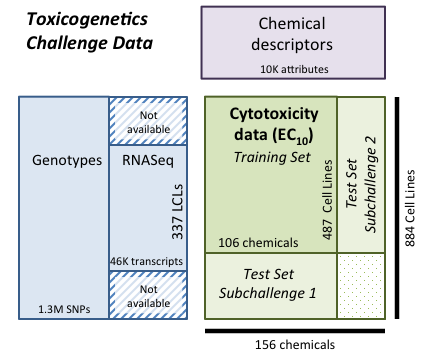 The group headed by Karsten Borgwardt consisted of two PhD students, Felipe Llinares Lopez and Carl-Johann Simon-Gabriel, which are fellows of MLPM. Also one of the group members of Jean-Philippe Vert’s team in Paris, Yunlong JIAO, is an early stage researcher within MLPM.